Looking to learn more about the super cool Inca tern? You're in the right place! Here we cover 27 interesting Inca tern facts as well as photos and videos. Hey, that bird has a mustache! That’s most likely the first thought that comes to mind the first time you see an Inca tern.

Yes, the Inca tern has a mustache, but did you know it serves a purpose? This seabird also has some peculiar habits. Want to learn more? Check out the following 27 Inca tern facts!

As far as seabirds go, the Inca tern is a colorful one. It is mostly charcoal-gray with white feathers peeking out from under the wings.

The long, black tail is forked. In contrast, the bill, legs, and webbed feet are bright red.

One look at the Inca tern, and you will see that its most distinctive feature is a handlebar mustache which is shaped from a tuft of white feathers growing out from each side of the bill.

Just below the mustache on each side of the face is a narrow wattle that is made of bare, bright yellow skin. 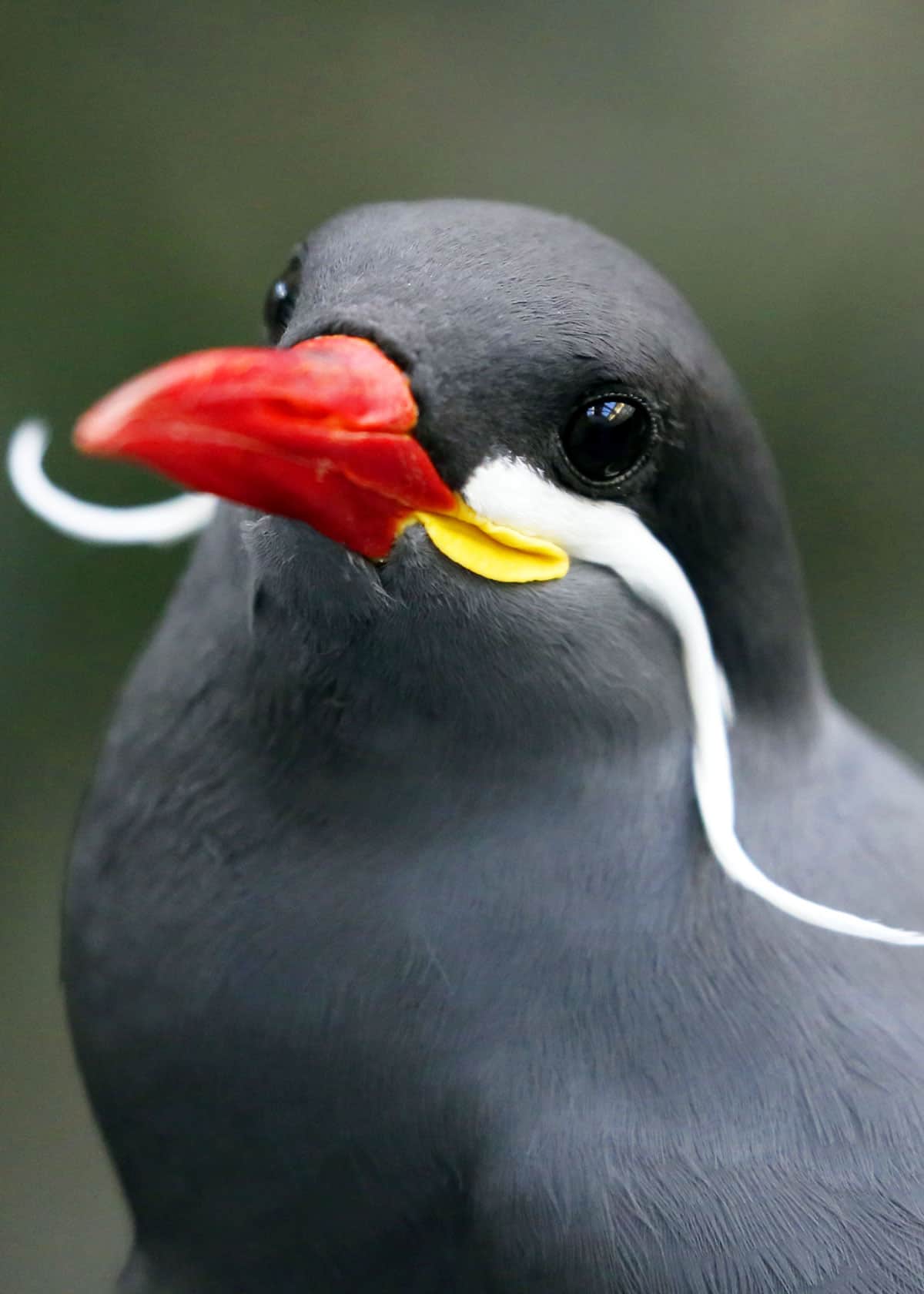 Both sexes have the mustache and look alike. Juveniles appear more brownish-purple and don’t grow their mustaches until they are about two years old.

3. How much does an Inca tern weigh?

4. What is the Inca tern’s wingspan?

5. How did the Inca tern get its name?

This seabird is so named because it inhabits the same range that the ancient Inca Empire once ruled.

6. What’s special about the Inca tern?

Well, of course, the Inca tern is special because of his dashing mustache. How many other birds sport such a fancy ornament? Sure, some birds may feature some whiskers above their bills, but none boast the long, perfectly shaped handlebar mustaches of the Inca terns.

But, did you know that the Inca tern’s mustache is much more than just a decoration? It actually serves a purpose.

Scientists have learned that the length of the Inca tern’s mustache indicates the health condition of the bird, meaning the longer the healthier. Research has shown that Inca terns with longer mustaches are more drawn to one another and produce more offspring that are larger with better immune responses. Now, those are some pretty cool Inca tern facts!

Inca terns are also unique because they do not migrate like other seabirds. However, when times are hard and food resources are slim, non-breeding birds may migrate.

7. Are Inca terns friendly or aggressive?

It depends on who you ask. Most Inca terns love each other’s company which is why they hang out together in large colonies.

But, if you ask other birds, dolphins and sea lions, they may tell you (if they could talk) that Inca terns are indeed aggressive. Why? #12 talks more about this.

8. How long do Inca terns live?

Inca terns can live up to 14 years in the wild and 25 years in captivity.

9. What eats an Inca tern? Predators and Threats

Cats, rats, and sea lions will eat, or at least attack, Inca terns. Raptors such as turkey vultures, owls, and peregrine falcons will also eat them. Also, if mom and dad Inca terns don’t watch their eggs and chicks closely, large seabirds may find and eat them.

Inca tern populations are threatened due to a number of causes that include overfishing by humans. Lots of people like to eat anchovies, but the Inca tern depends on these small fish to survive. If humans eat them all, the Inca tern could go extinct.

Another threat is excessive guano harvesting. Guano (seabird poop) makes great fertilizer, but if too many people are allowed to disrupt the guano islands where the Inca terns often live, their habitat could be destroyed. Fortunately, the Peruvian government has established a reserve to protect these seabirds.

10. Is the Inca tern endangered?

There were once millions of Inca terns, but now there are only about 150,000 of these seabirds remaining in the wild.

They are not endangered, but they are listed as Near Threatened by the IUCN (International Union of Conservation for Nature).

Inca terns are piscivores. This means they eat fish. They especially like anchovies but will also eat other fish, plankton, and crustaceans (shrimp, crayfish, crab, etc.)

These seabirds obtain their food by flying over the water. When they spot their prey just under the surface, they will dive down and swoop it up in their sharp, pointed beaks.

They are also smart birds because they also follow sea lions, dolphins, whales and fishing boats to scavenge scraps. But, that’s not all. Inca terns have another way that they get food. Check out the next fact.

What is kleptoparasitism? Kleptoparasitism is when an animal steals food from another animal. “Klepto,” meaning to “steal”, and “parasite,” meaning a very one-sided relationship where one organism benefits at the expense of the other.

This means Inca terns sometimes steal their food from other animals. They often do this by diving down and snatching it right out of the mouths of sea lions and dolphins which is pretty daring. Inca terns are even so brave as to fly down and grab fish from a fishing boat.

Another kleptoparasitic bird is the magnificent frigatebird

13. What is the Inca terns Latin name?

The Latin name for the Inca tern is Larosterna inca.

14. What other names does the Inca tern have?

I did a little research and can’t find any other names used for the Inca tern unless you want to count kleptoparasite.

I am sure there are plenty of fishermen out there who have some choice nicknames for them. If you know of any other names for the Inca tern, let us know in the comments section!

Inca terns are considered monogamous because pairs do mate only with each other during an annual breeding year. However, not all of them mate for life.

Some pairs may change up mates each year, with their newly formed bonds highlighted by elaborate courtship displays.

Inca terns begin laying eggs when they become sexually mature. This is usually around the age of 2 or 3 years old. Inca terns usually lay eggs during two different periods each year. These include April through July and October through December.

18. How many eggs does the Inca tern lay? What do they look like?

Inca terns lay between one and three eggs per clutch. They are either tan or light brown with dark brown spots.

The call of the Inca tern has been described as a “cat-like meow.”

But, if you ever have a chance to listen to it, you may agree with me that it sounds like an angry cat or a cat with a hoarse voice.

Yes, their angry-cat meow sounds can be loud. These birds hang out together in large colonies, so you can imagine what a loud chorus they make.

They are especially noisy during the courtship period and when marking their territories.

Inca terns can carry diseases such as avian malaria and avian influenza. Their chances of becoming infected with bird flu increase when they share environments with various waterfowl.

Thankfully, researchers often monitor the spread of bird diseases to not only protect the birds but humans as well.

22. Where does the Inca tern live?

These colorful seabirds live in South America along the Pacific coasts of Chile and Peru.

They especially are found nearby the chilly waters of the Humboldt Current, which is home to the world’s “most productive marine ecosystem” which is the equivalent of a smorgasbord for the Inca terns.

23. What is the habitat of the Inca tern?

Inca terns nest together in colonies. They make their nests mainly in the holes, crevices, and burrows of rocky cliffs. It is important that these cavities are deep to protect the eggs and chicks from predators.

However, Inca terns will also nest in the vacated nests of Humboldt penguins as well as piles of wood and abandoned buildings.

You can see the Inca tern if you take a trip to the Pacific coasts of Peru or Chile. But, if you don’t want to go that far, you can see these unique birds in zoos all around the world. Here are a few:

26. Do Inca terns have a courtship ritual?

A list of Inca tern facts wouldn’t be complete without information about the love relationships between these seabirds. Inca terns do have a courtship ritual, and it is quite elaborate, especially for first-time mates.

The male starts the ritual off by ascending in flight at a high speed to show off his ability to the female. If impressed, the female will chase after him, and together, they will sky dance.

The male will also show off his diving skills and pursue the female in the sky to offer her the fish gift he caught. This lets the female know whether he will be a good provider for her and their future kids or not.

Once the female accepts the gift and the male, both sexes will choose a nest site together, and they will continue their courtship on the ground with strutting, twirling and wing-drooping.

27. Do both Inca tern parents raise their chicks?

Yes, both mom and dad Inca terns work together as a team to raise their young. They take turns incubating the eggs for about four weeks.

After the chicks hatch, Mom and Dad both will feed them until they are ready to fledge at about seven weeks old. everywherewild.com
30 Potoo Facts: The Bird Behind the Meme (7 Potoo Species) Tons of Photos!
← Previous
How to Choose the Best Camera for Wildlife Photography (Birding Guide)
Next →
Click here to cancel reply.

Just thought you should know, the Inca Turn was featured in an episode of Murdock. It's a very popular Canadian detective show set in the late 1900s.

Dear Justbirding sites, Good morning,. I have thoroughly learned basic data and life style of Inca tern and specific beauty of mustaches. The compilation is good and useful to all students. It is appreciable. P.S.Sekar India