Curious about nocturnal birds? Then you've come to the right place! Here we cover 20 of the coolest winged critters of the night as well as what makes a bird nocturnal. Read on to learn all about owls, nightjars, and even a nocturnal parrot!

What makes a bird nocturnal?

Some birds are only active at night, meaning they feed or hunt at night, and sleep during the day. Other birds are diurnal (daytime) birds but may sing at night. Then, you have birds that are active at twilight but not the entire night.

Nocturnal birds are different than daytime birds. Birds of the night usually have large eyes, camouflaged plumage, and enhanced senses. They also exhibit different behavior such as freezing up or remaining motionless if disturbed during the day.

Want to know more about which birds are creatures of the night? Check out these 20 nocturnal birds.

You’ve probably heard people refer to owls in general as “hoot owls,” but the barred owl is the real deal.

It is also the only owl in the eastern United States with brown eyes. (All other owls have yellow eyes.) It prefers dozing by day and hunting by night in old growth woodlands but is attracted to city lights where getting hit by a car is a serious threat.

The kakapo is probably one of the world’s most fascinating nocturnal birds. Wearing greenish-yellow plumage that looks more like a coat of moss to match its habitat, this odd bird is one of the heaviest birds in the world.

It’s also the world’s only flightless parrot, but it can “parachute” from a tree. It has a sweet-smelling odor and is friendly toward people.

Its reproduction rate is determined by the cone cycle of the rimu tree, and it has a lifespan longer than many humans (95 years).

You may think this nightjar bird is a small pile of dead leaves until it flies away. Nesting on the ground, this bird hides in plain sight because its mottled, brown/gray/tan plumage blends in with its surroundings. Come nightfall, it feeds on flying insects.

This small, yellowish-green Australian parrot is so adept at staying on the down-low that researchers once believed it was extinct due to no reported sightings between 1912 and 1979.

One of the most mysterious birds in the world, this ground-dwelling parrot stays hidden in dense shrublands by day but can fly up to 62 miles by night in search of food and drinking water.

You may find it difficult to detect the tawny frogmouth because its mottled black/gray/white plumage makes it look exactly like tree bark. It resembles an owl but has a large, wide mouth like a frog that it uses to catch flying insects at night. Tawny frogmouths rarely leave their habitats, and small families of this species will line up side by side on a single tree branch.

This white and brown-streaked bird has nicknames like “thick knees” for its yellow, knobby knees and “goggle eyes” because of its wide yellow eyes, but its official name comes from its call that sounds like “kur-lee.” 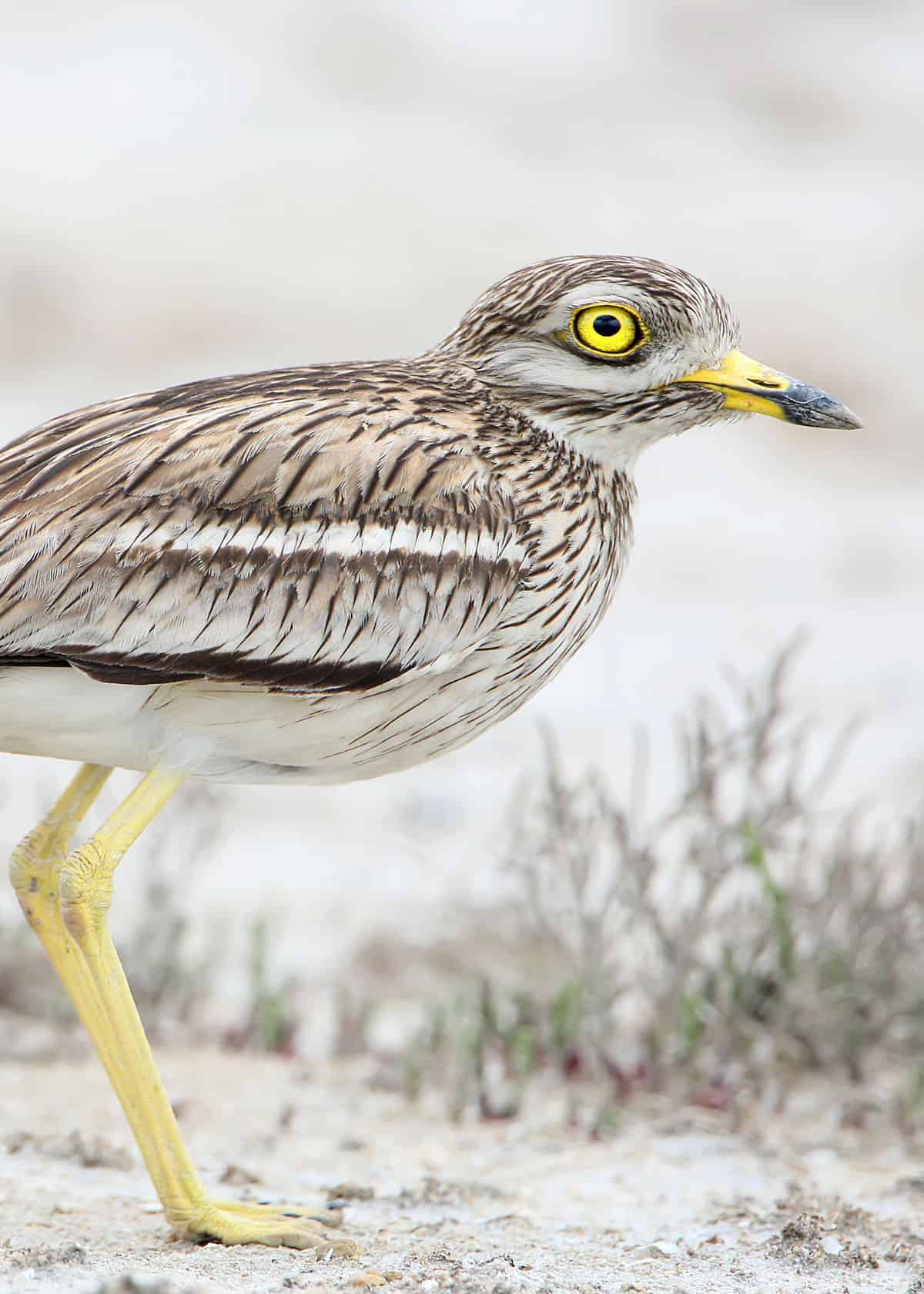 The stone curlew breeds in Europe and overwinters in Spain and Africa. It hunts at night for juicy prey like woodlice and beetles.

“Mockingbirds aren’t nocturnal birds!” That’s what I used to think, but the bachelor males are considered nocturnal because they sing at night, calling for a mate. 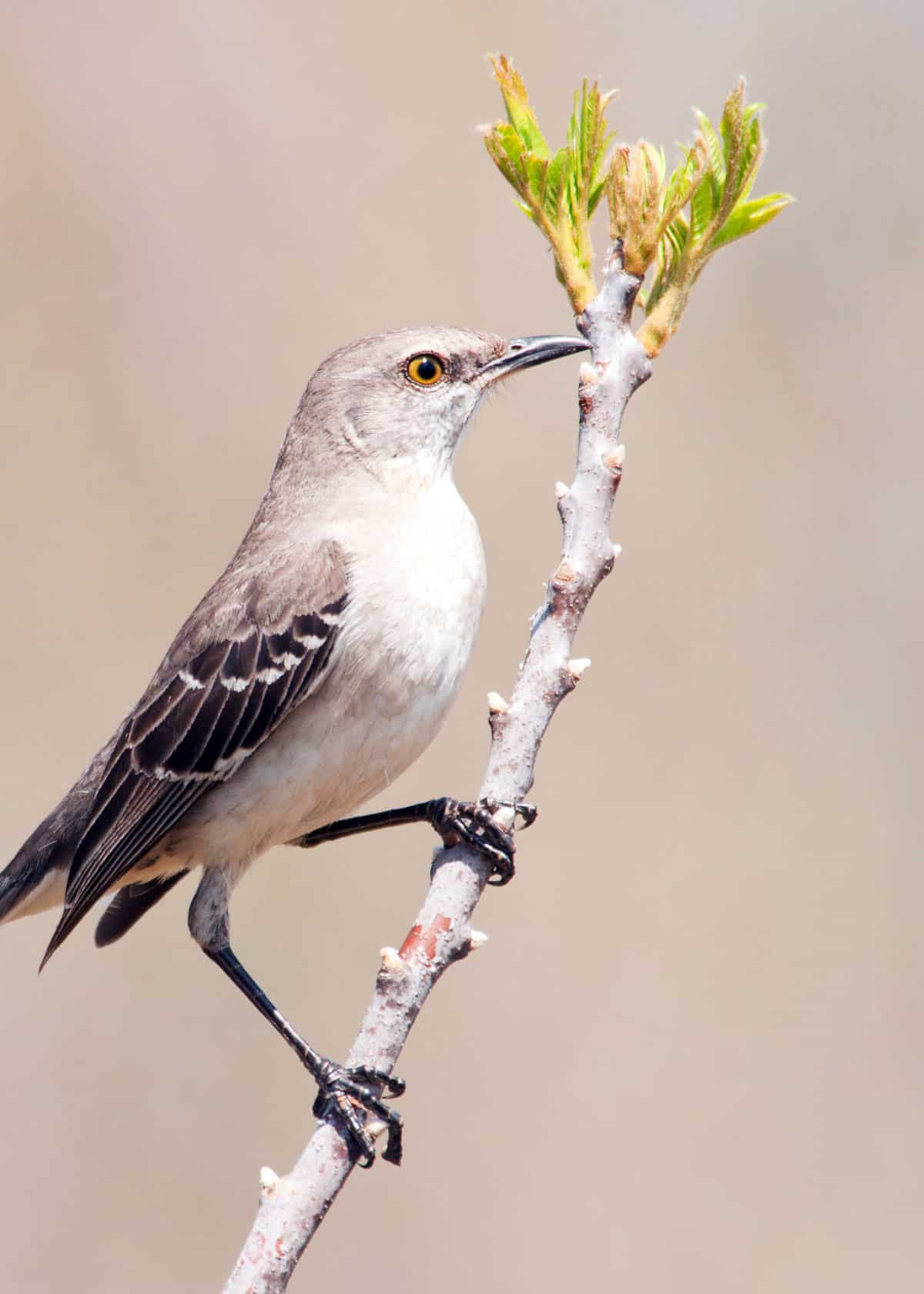 Mockingbirds are intelligent with a great memory and can mimic a wide medley of sounds like other bird songs, frog croaks, human whistling and cat meows.

This black and white bird is socially monogamous but practices divorce and mate-swapping.

Both the smallest and most common of the nocturnal birds in Australia, this gray (sometimes reddish-brown) bird lives in mangrove swamps, grasslands, open woodland and dense forests alike.

It mates for life, raises one clutch (2 to 5 eggs) per season, feeds at night on insects, and roosts in tree hollows by day.

Little penguins differ from all other penguin species because they’re smaller, and their feathers are blue and white instead of black and white. They spend approximately 80% of their lives swimming in the sea and foraging for fish, squid, and krill. During the day, they rest in their ground burrows, safe from predators.

One look at this brown-and-buff-streaked owl, and you’ll see why it’s named the long-eared owl. Its ear tufts stand up straight and tall from the middle of its head like antennas.

It’s a secretive owl that takes cover in thick conifer trees during daylight hours and comes out at night to hunt over open country. 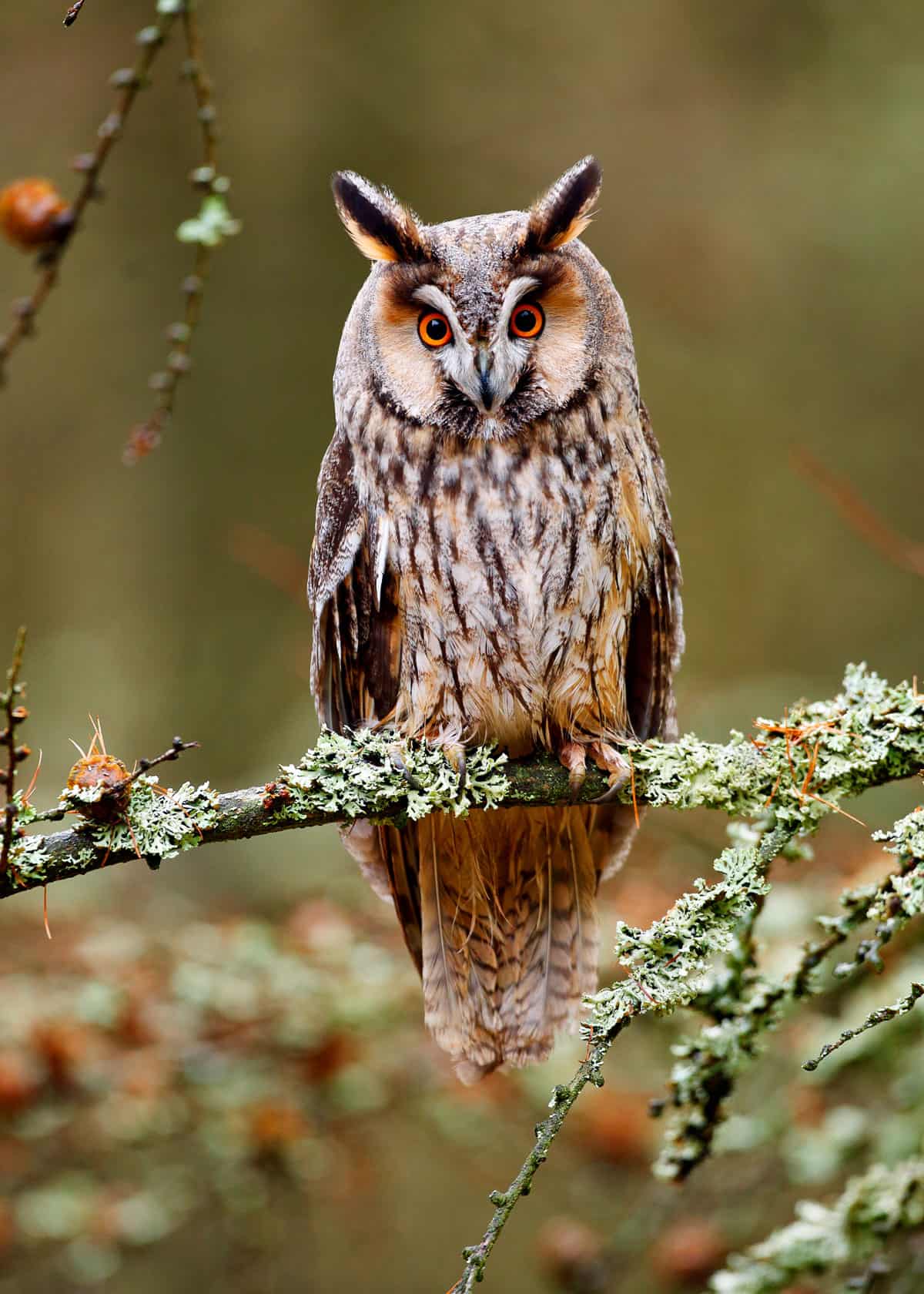 The ashy-gray plumage of this seabird helps it blend in with the foggy coastlines of California and Mexico where it lives among colonies.

This seabird feeds on fish and other sea life that rise to the surface at night. It also sticks with the same mate and the same rock burrow nest for many years.

A medium-sized nightjar, the whip-poor-will is mentioned in numerous legends, novels, poems and songs across eastern North America.

Named after the sound it makes during the night as it forages for insects, this mottled brown/black/gray bird nests on the ground by day in the camouflage of leaves.

The “national symbol of New Zealand,” the kiwi is a unique, flightless bird that is a cousin to ostriches and emus.

Looking more like a furry mammal with a really long beak and four clawed-toes on each foot, the kiwi has small eyes but a strong sense of smell that helps it sniff out prey when hunting at dawn and dusk.

Did you know that the kiwi is believed to be the world's “most ancient bird“?

Found in the dense, tropical forests of Southeast Asia, this small bird features ear tufts behind its eyes and brownish-black feathers with buff speckles.

Its legs are weak, so it’s not a good walker, but it does have strong wings that enable it to catch insects while flying at dusk and dawn.

The nightingale may look like a small bird of drab, light brown plumage, but it boasts a big, beautiful song that has inspired poets, songwriters, and novelists over the centuries. 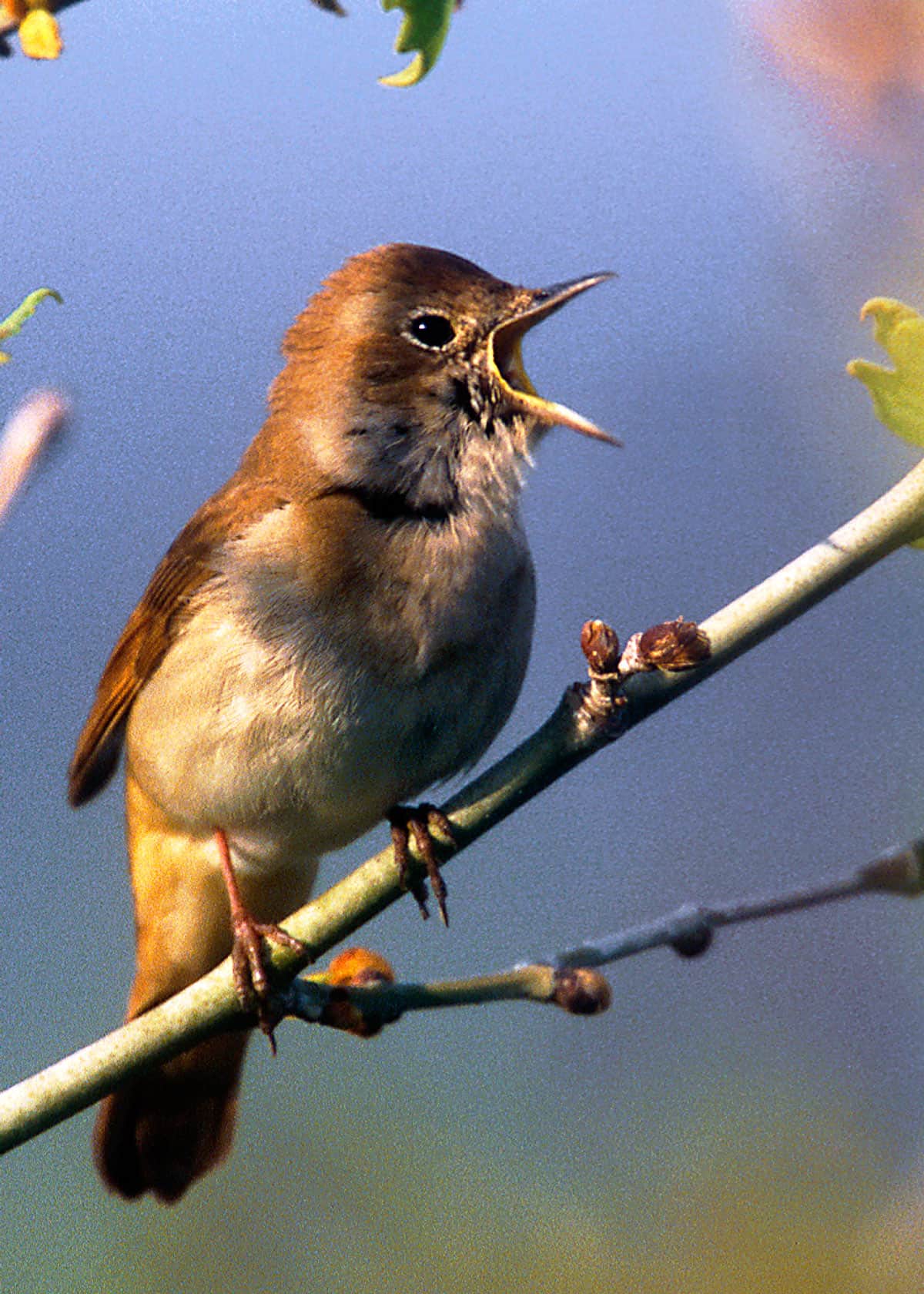 Bachelor males sing at night to attract a mate. “Married” males follow their wives around to guard and protect them. Bonded pairs usually raise two broods each year.

A stocky heron with long, yellow legs and black and white plumage, the black-crowned night heron forages at night in wetlands, making a distinctive choking sound. Its stomach acid is strong enough to dissolve the bones of its prey. Nestlings vomit when threatened, and adults are perfectly okay with raising the offspring of other bird species.

The potoo is a strange-looking bird with bulging, yellow eyes, a long neck, a gaping mouth, and mottled brown/green/gray plumage that disguises it as the tree branch it roosts on during the day. Even stranger is the bird’s eerie call that rings out into the night as it waits to feed on fly-by insects. These nocturnal birds usually mate for life, and both sexes share parenting duties.

This tan-and-brown-streaked bird with white speckles and a blue-gray face doesn’t nest in corn but rather tall grasslands.

However, it does make a “crex-crex” call that sounds similar to a digital alarm clock. Males are polygamous and make these calls during the night to attract females. After mating, the female raises a clutch of 8 to 12 greenish-gray, speckled eggs by herself.

If you’re driving around at night somewhere in Southeast Asia, your headlights may illuminate upon a small creature that appears to have red, glowing eyes.

That is most likely an Indian nightjar, a small bird of mottled brown feathers and (normally) black eyes. Indian nightjars like to hang out on roads under street lights, catching insects. It has a unique call that some say sounds like a bouncing ping-pong, but I think it sounds more like a coin being spun upon a tabletop.

During the day, this bird lies motionless on the ground in open woodland or scrubland, camouflaged by its plumage.

This nightjar is not related to a hawk, but it does hunt at twilight at both dawn and dusk. Similar in the drab coloring common to most nightjars, this little bird is noted for the booming sound it makes when abruptly peeling out of a deep dive.

It is usually the male doing this to show off for the female. Just before dawn, you can catch sight of these nocturnal birds flying around in lit areas such as street lights and stadiums.

Birdwatching at night for nocturnal birds makes for an interesting adventure. Did you learn anything from this list that you didn't already know? Do you have questions? Let us know in the comments! Drew Haines is an animal enthusiast and travel writer. She loves to share her passion through her writing.

She graduated high school at sixteen and started her own business, Everywhere Wild Media. And she runs Everywhere Wild and JustBirding. She also guest blogs on Storyteller.Travel

Episode 19: All the Birds of the World with Josep Del Hoyo | Bird Podcast

[…] Talks about nocturnal birds. And diurnal birds like owls and night hawks. A trip in […]

I’m trying to figure out a type of bird, if anyone can help. There’s two larger white birds that come out at night and when they fly they make a loud clicking type sound. Living in SoCal. Does anyone know what kind of birds they are? 🙏🏻