Birds are beautiful, colorful, and some are just plain weird. There are also some birds that we feel qualify as pretty cool. Check out this list of 17 cool birds!

Hang a gold chain around the black and white hawk eagle, and you got the boss of all cool birds. How many other birds do you see wearing a spiffy black and white suit with matching sunglasses to boot? He looks like the classic #dealwithit 😎.

Yes, this bird really does wear natural shades. And they're not just for looks. That black mask around his yellow eyes serves to protect the bird’s eyesight from the sun’s glare.

Found in tropical forests from southern Mexico all the way down to Argentina, the black and white hawk eagle spends much of its time flying over the treetops in search of its prey.

During mating season, it is also one cool dad. After hooking up with a wife, the male is dedicated to feeding her while she incubates their single egg. After the chick hatches, Dad helps Mom feed and raise the youngster.

The Indian paradise flycatcher is a beauty and he knows it! Decked out with showy plumage of black and reddish-brown (sometimes white), this perching bird sports a fancy crest and two long tail feathers that billow like a pretty ribbon during flight.

This flycatcher works hard to keep up its appearance by bathing in water pools several times a day. Living in the thick forests all over India and throughout Central Asia and south-eastern China, these paradise flycatchers form socially monogamous pairs that work together to build their nests and raise their chicks as a team.

Few individuals are brave enough to wear their hearts on their sleeves for all the world to see, but the bleeding heart pigeon is so cool and confident that it bears the image of a bleeding heart on its white breast.

While both sexes feature this trait, the male’s “bleeding heart” is brighter. This pigeon is also called the Luzon bleeding-heart because it is native to the Philippines island of Luzon.

When courting a female, the male bows and displays his chest to her, offering her his heart. How cool is that?

You’ve seen those cool dudes sauntering around with their headphones on, not caring what others think of them. In the avian culture, that’s the white-necked rockfowl.

Sporting charcoal and white plumage, this rockfowl has a featherless head with a bright yellow face and two black patches behind each eye that give the bird its appearance of wearing headphones.

You won’t find the white-necked rockfowl anywhere except in West Africa, from Guinea to Ghana, where it likes to hop along stony hills with mixed species ahead of driver ants to catch the insects that are flushed out by the movement of the ants.

Any birds that can fly around the world are cool birds, and that includes the grey-headed albatross. This bird loves to live where the weather is cool also: on sub-Antarctic islands in the Southern Ocean.

This albatross has white and brownish-black plumage with a grey head for which it is named.

Like other albatrosses, this bird mates for life and breeds every other year in the same nesting colony. When not breeding, the gray-headed albatross spends much of its time soaring over the ocean and has even been recorded circling the globe twice in one year.

Some dudes are just naturally blessed with looks and charm. Such is the case with the Temminck's tragopan.

Like the female, he is mostly reddish-brown with white spots, but his blue face, horns, and inflatable bib with the scarlet markings create an impressive sight. 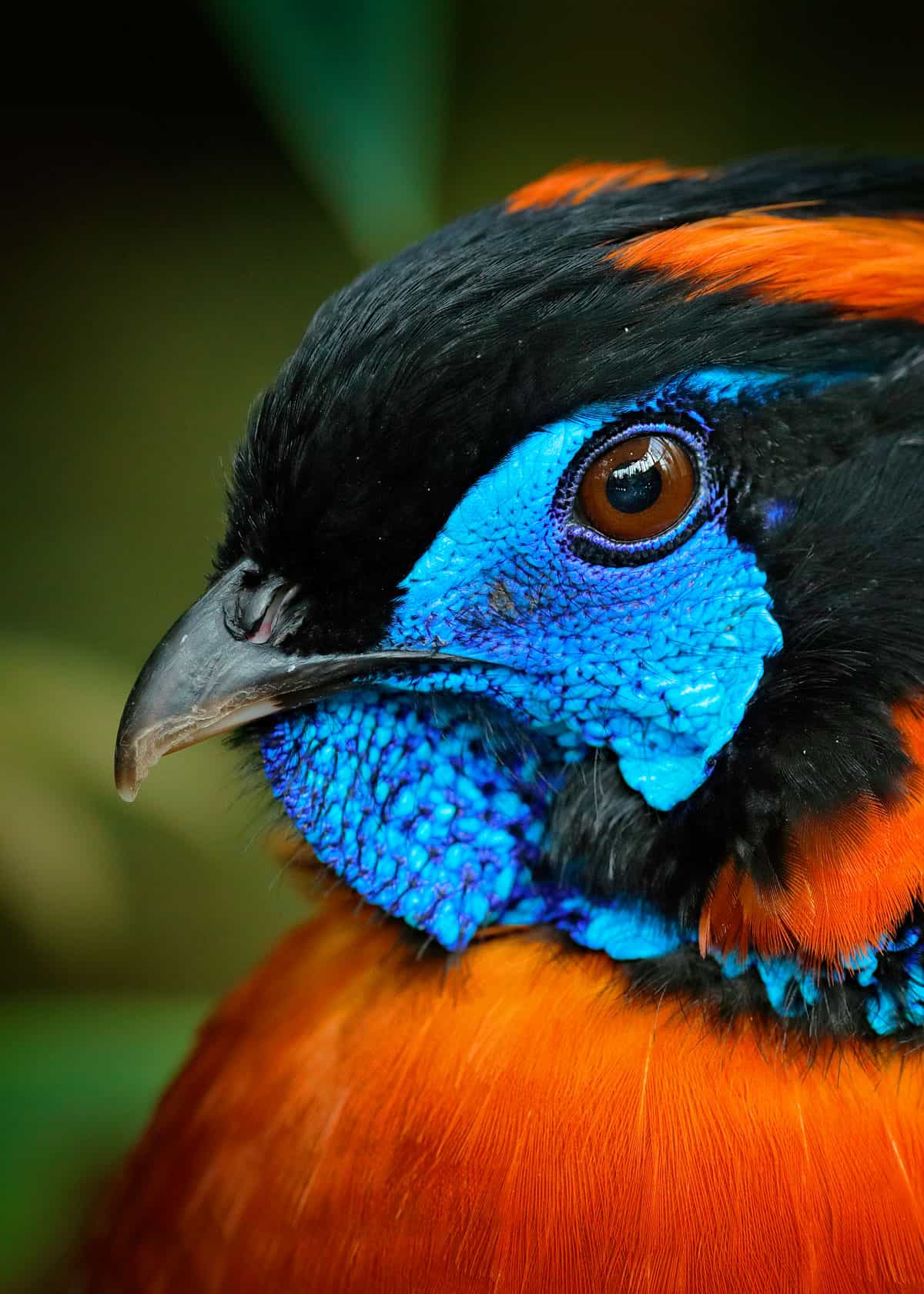 Otherwise a shy bird that stays to himself in dense rhododendron and bamboo forests, this bird really knows how to put on a spectacular courtship dance to attract a mate.

Once he forms a bond, he is usually monogamous, but the female raises the three to five chicks alone.

Tufted puffins can carry up to 20 fish in their mouths at one time. So, what’s your superpower? Seriously, these cool birds have specialized bills that that enable them to snag and hold multiple small fish crosswise for transporting to their nesting chicks. These black and white puffins with their orange bills and signature golden plumes are great divers and can plunge as deep as 80 feet (24 m) to catch fish and other ocean prey.

When they aren’t in the water, they nest in colonies among grassy slopes and rocky edges along the coastlines of the North Pacific Ocean.

The red-winged blackbirds are like an army of birds that are all clad in black uniforms with red epaulets.

They may not be the largest bird species in body size, but many bird specialists believe they are the most abundant species across North and Central America. These birds must be aware of this claim because they travel together in large flocks. As if to prove the phrase, “there’s strength in numbers,” these birds are also fiercely territorial and are known to attack much larger birds and even dive at humans if they feel their territory is being invaded.

Red-winged blackbirds nest in colonies in open grassy areas, prairies, marshlands, and wetlands. Males are polygynous and defend up to 10 females which are dark brown and raise three to four chicks per clutch.

You know you’re cool when you’ve got bling-bling to show for it. The gray peacock pheasant knows he’s got swag because he struts his stuff to the ladies, flaunting his dazzling gray ensemble that’s bedecked with metallic green and blue jewels (otherwise known as eyespots). The national bird of Myanmar, this beautiful pheasant is found in the wild in southeastern Asia and southeastern China but is a popular species for domestication because it’s non-aggressive and friendly.

The Lady Amherst’s pheasant is not only named after nobility, but it also appears to be wearing noble garb.

The male’s multicolored plumage, fancy cape, and long, elaborate tail certainly flatter its namesake, the wife of the Bengal governor who sent the first specimen of this bird to London in 1828. 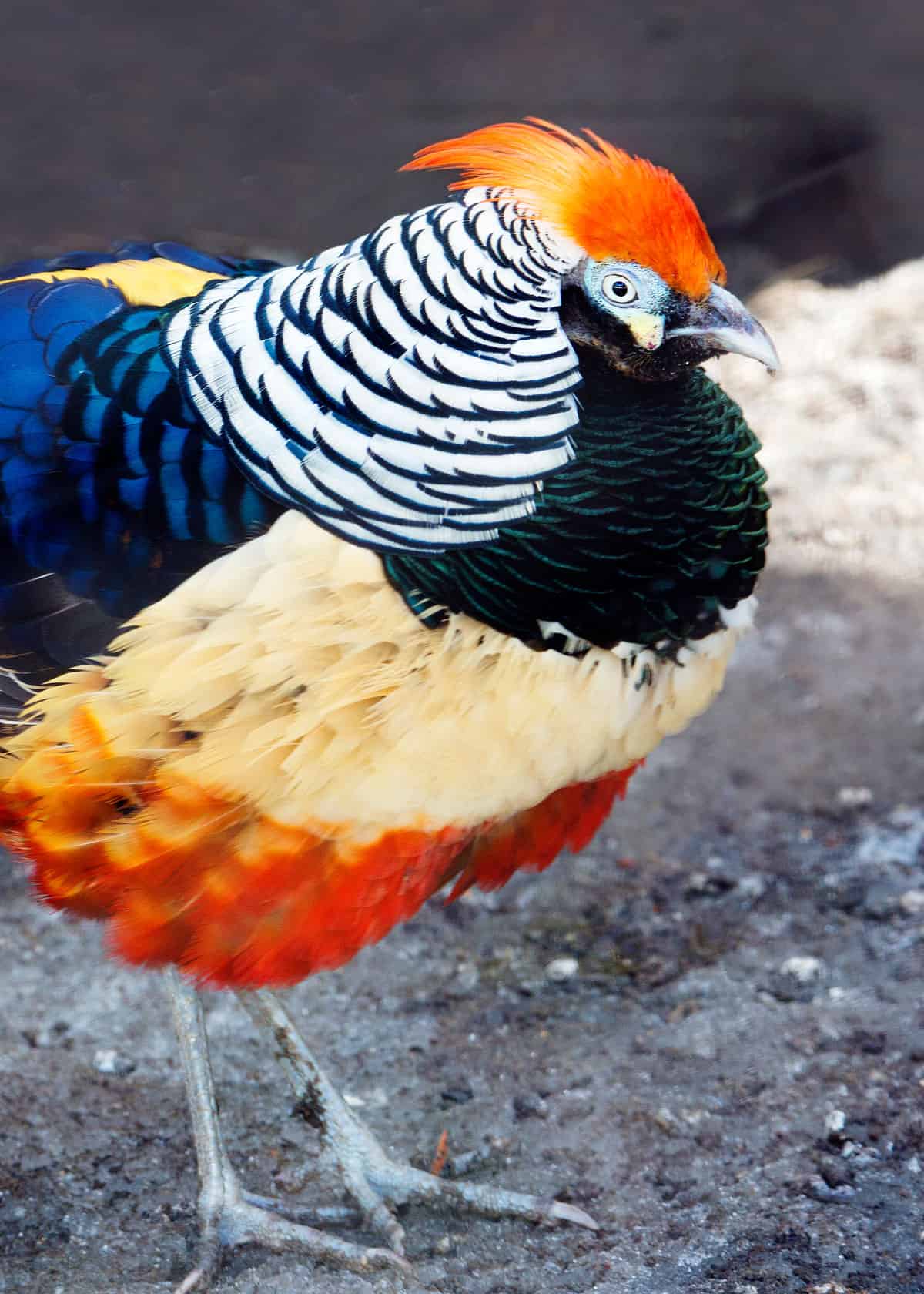 This beautiful pheasant prefers hiding in the dense forests and bamboo thickets of southwestern China and northern Myanmar.

It displays a spectacular courtship dance that involves puffing its cape and expanding its ornate tail. Did you know this bee-eater can eat up to 250 bees (and other stinging insects) a day? But, don’t worry about the birds killing out all the bees because even though that amount seems high, the bird’s impact on the bee population remains low.

Found worldwide, magpies could be described as the mobster species of the bird world. Noisy and aggressive, they even dress the part in their sharp, black and white suits. 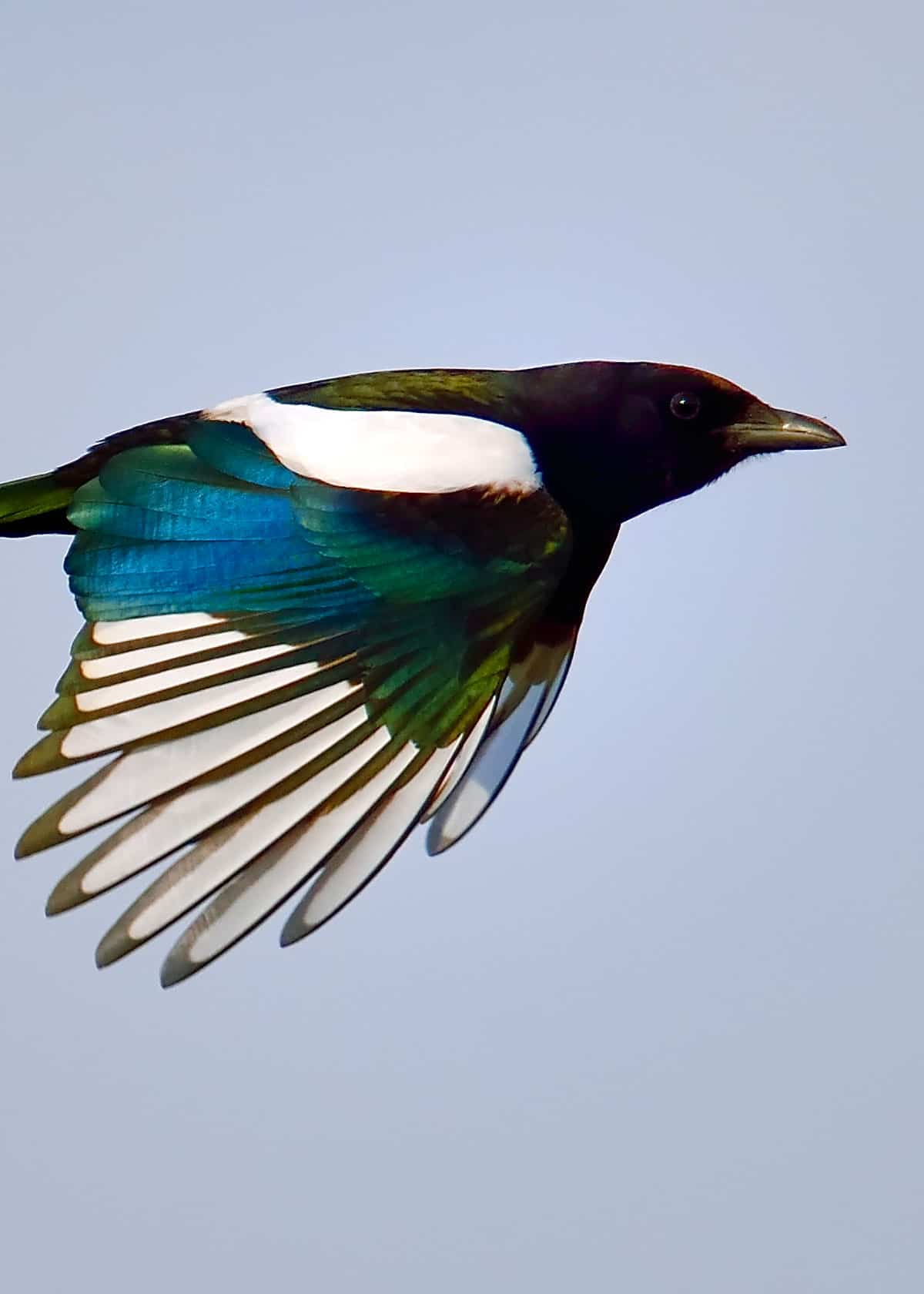 They love to raise a ruckus wherever they go and can mimic the calls of other birds.

They have a penchant for stealing shiny stuff, and they may just dive-bomb you if you don’t offer them a nod of respect.

They sport facial embellishments (blue faces, red-eye rings, and yellow warty nodules). They even like hanging out together in large communes, or flocks, in the rainforests of Central America.

The male struts his colorful feathers to attract the female. After mating, the hen raises between 8 and 16 chicks.

A popular game bird, the ocellated turkey is hunted by large cats and humans alike.

The northern royal flycatcher owns a dazzling headdress like no other bird.

Normally, this bird is just a casual, ordinary dude of cinnamon-brown feathers, but get him excited, and you are in for a sight as his scarlet hammer-head crest fans out to reveal violet blue polka dots and crimped edges. No less stunning, the female also features the headdress, but hers is usually yellow.

This little bird prefers the solitary life in the lowland forests of Central America except during mating season. Both male and female exchange displays of their crests during courtship. After mating, the female broods two eggs by herself.

Great crested grebes are cool birds because they are proof of romance in the avian kingdom. On land, these elegant waterbirds are clumsy, but on water, they are like graceful ballet performers.

During their courtship dance, for which they are most noted, both sexes bob their heads and shake their beautiful head plumes in a synchronized dance. Both mom and dad crested grebes incubate their eggs (four on average) in a floating nest. If they leave the nest temporarily, they cover the eggs with rotting plants to keep them warm.

After hatching, the chicks cannot swim and will ride on the backs of their parents.

The northern flicker is probably one of the most stylish woodpeckers you’ll ever see. In contrast to a black/white barred and spotted body, the male sports a pale pink and blue head with a black chest and a red nape.

The female is mostly light brown with black barring and spots. While northern flickers eat nuts and berries and drill into tree trunks for insects like other woodpeckers, they also hammer into cow dung, soil, and ant colonies for insects and larvae.

They also protect themselves against parasites by preening their feathers with the acid excreted by ants.

Found in the gallery forests and scrublands between Mexico’s Yucatan Peninsula and Costa Rica, the turquoise-browed motmot is a striking bird of turquoise, olive green and rufous plumage.

But, what really makes this bird stand out is its long racket-shaped tail that consists of two bare shaft feathers with feathered tips. Unlike most other birds, both sexes of this species feature this ornamental tail that they wag like a pendulum.

It is believed that they do this for both courtship display and to signal that predators are near. Another interesting fact about these cool birds is that they inherently know how to eat non-poisonous snakes and avoid poisonous ones.

So, what do you make of these cool birds? Did they impress you, amuse you, or make you a little envious? If you could be a bird, which one of these would you choose? We would love to see your thoughts in the comments. If i was a bird i think I would probably be a duck because my lovely gf said so :)

Thanks so much! Glad you enjoyed it :D