Mandarin ducks have been making a splash in the media, but how much do you really know about them? 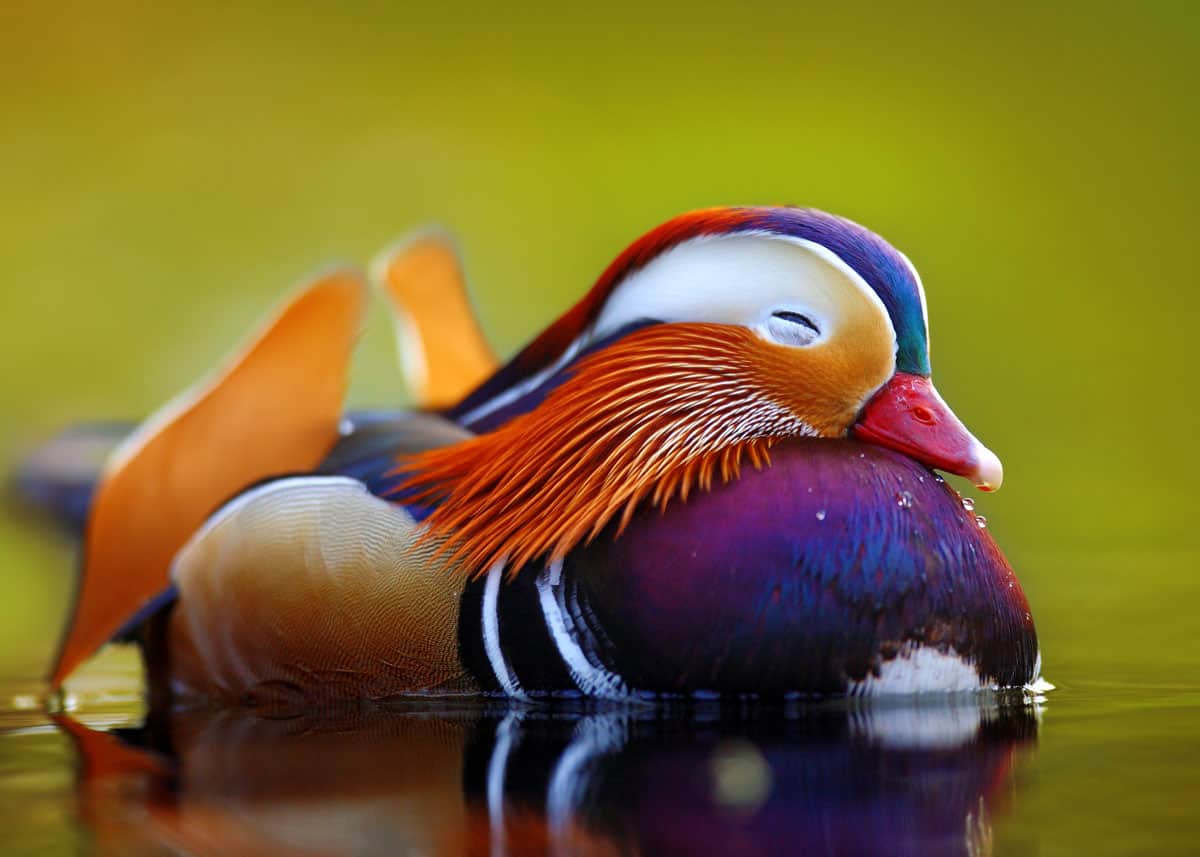 Here are just a few mandarin duck facts that can bring you up to speed on these beautiful and colorful birds.

1. What is a mandarin duck?

Mandarin ducks are small, colorful ducks that originated in East Asia. Their name is Chinese, but they also have a lot of cultural significance in places like Japan and Korea.

They can currently be found all around the world thanks to travelers in the 19th century who established colonies of mandarin ducks in the west.

2. Where have I seen a mandarin duck before?

You might be familiar with mandarin ducks as “wedding ducks.” Since they mate for life, they're a popular symbol of love and fidelity in Asian countries.

In the olden days, a man might buy or catch a pair of mandarin ducks to give to his bride's family; in recent times, however, couples just use pictures and carvings of mandarin ducks as wedding decorations. They are always presented in pairs.

You might also recognize mandarin ducks as a general symbol of romance. There are lots of idioms about them in various languages:

Mandarin ducks are known for their vivid coloring. They're waddling little rainbows of red, orange, purple, blue and green, and if you look closely, you can spot some burgundy highlights as well.

In an interesting twist, only the males of the species have this eye-popping plumage. The females are mostly gray and white.

Another distinctive feature of the mandarin duck is the presence of “sails” on its back. These are actually large, upright feathers, but they look so much like the sails of a boat that the comparison is unavoidable.

4. Do mandarin ducks have gills?

No. As members of the duck family, mandarin ducks don't have gills.

You only hear this word around them because of their unusual neck feathers that have a ruffled, accordion-like appearance. They really stand out from the usual smooth-necked ducks, so some people refer to them as “gills.”

5. What do mandarin ducks eat?

Mandarin ducks love grains, seeds, acorns and other forms of plant life. They aren't total vegetarians, however, especially in the summer when lakes and ponds are teeming with life.

They enjoy everything from frogs to fish, and they have no qualms about chasing down a tasty snail. They've even been known to catch small snakes!

Their diets are a bit more restricted in winter, especially in cold-weather regions. This is when they'll turn to their trusty grains, pines, seeds, and weeds.

When in captivity, mandarin ducks are usually fed plants and small insects. Some zoos will toss in things like baby carrots and bean sprouts for a treat.

If you spot a mandarin duck at your local park, you might be tempted to fling them the crusts of your sandwich.

Bread is very bad for ducks. It's basically junk food that offers no nutritional value and can actually cause all kinds of health problems.

If you can't stand the thought of a hungry duck, toss them some small, easily-digested snacks like oats and mealworms. You can also stop by a pet or farm supply store and buy a special “duck feed” mix that won't hurt their digestive track.

7. How big is a mandarin duck? How much do they weigh?

Mandarin ducks are mid-sized birds. They usually measure about 15-20 inches across with a wingspan of 25-30 inches. They can weigh up to 1.5 pounds.

Like many other waterfowl, male mandarin ducks undergo a molting process. This means that they periodically shed their feathers and grow new ones.

They'll look a lot like their female counterparts at this time; without their coat of many colors, they have a simple gray or brown appearance. This is called their “eclipse” plumage.

9. How long do mandarin ducks live?

There hasn't been a lot of research into the lifespans of mandarin ducks. Some sources say that they live around 6-7 years; others think that they can clock around 10 years.

According to the Animal Aging and Longevity Database, their maximum recorded longevity is 10.4 years, but it's suggested that they might have the potential to live twice as long.

10. Are mandarin ducks rare or endangered?

The good news is that mandarin ducks aren't endangered. They're classified under “least concern” in the extinction hierarchy of the International Union for Conservation of Nature (IUCN).

The bad news is that their population is on the decline, so you might want to keep an eye on their status in upcoming years.

Since they aren't endangered, mandarin ducks don't have any special protections in place. According to the IUCN, there are about 65,000-66,000 mandarin ducks thriving in zoos and wetlands around the world.

Yes. Mandarin ducks and wood ducks are the only two species under the “aix” classification of duck.

13. Can you eat a mandarin duck? What do they taste like?

Mandarin ducks are safe to eat in the sense that they won't make you sick. However, everyone agrees that they taste terrible!

Maybe it's because of their diet of worms and weeds; maybe there's just something naturally repulsive about their meat. But one of the reasons that they're doing so well in the wild is because they aren't being hunted for food.

14. Are mandarin ducks monogamous? Do they mate for life?

Yes. Once a mandarin duck finds a partner, they remain with that partner until their death.

This is why they're seen as such romantic symbols in traditional Asian cultures; they represent a lifelong commitment.

15. How many eggs do mandarin ducks lay?

Female mandarin ducks lay between 9-12 eggs at a time. Most of them create their own nests in the holes and cavities of densely-wooded trees.

But mandarin ducks have also been known to participate in “egg-dumping” where they lay their eggs in another female's nest. This can result in nests with dozens of eggs jostling for space!

Mandarin ducks do enjoy nesting in trees. The coverage provides warmth, stability, and safety from predators.

When they're not laying eggs, however, you'll mostly find mandarin ducks making habitats in the low grasses and woodland areas surrounding bodies of water. They also like marshes, swamps, lagoons, and water meadows.

17. How do mandarin ducks treat their young?

Mothers are the primary caregivers of baby mandarin ducks. After laying their eggs, they'll protect the nest for 28-33 days until everyone hatches.

Then, the moms will jump to the ground and encourage their ducklings to do the same. Even when the trees are very tall, it doesn't hurt the babies to take the plunge. Their fluffy padding and low body weight protect them from damage.

Fathers are a bit more hands-off when it comes to child rearing. They might protect the nest during the initial egg-laying stages, but they usually leave before the ducklings are born. They have to go and molt.

Mandarin ducks are naturally found in China, Japan and the lower parts of Russia. There's also a sizeable population in Great Britain because of those early-century travelers that we've already discussed.

Amusingly, there are also scattered settlements of mandarin ducks in various U.S. states. It's believed that these rogue birds escaped from captivity and started breeding in the wild. Their populations aren't huge, but they cause a stir whenever they pop up in unexpected places.

Mandarin ducks are extremely skilled fliers. In fact, they're known for their maneuverability; one of the reasons that females make their nests in trees is because they're able to fly and perch in places where other creatures struggle to go.

It isn't all business, however. Mandarin ducks also take to the air to play games of tag. They'll chase each other through the trees and along the water in a way that looks like fighting but is actually just fun.

Of course! All ducks can swim. That's why they have webbed feet.

In the case of mandarin ducks, they're just as adept at swimming in the water as they are at flying through the air, and they aren't afraid to stick their whole heads underwater when searching for food.

Here's one of those fun mandarin duck facts that you can share at parties: Mandarin ducks don't quack.

They make small, almost chirping noises while going about their daily activities, and they can let loose shrill and alarm-like sounds to signal danger, but they don't quack like North American ducks.

There are also subtle differences between male and female mandarin duck sounds, but you have to have an experienced ear to distinguish them.

Mandarin ducks are known to be quieter than other ducks. But all bets are off when a predator is near! They'll sound the alarm to others in the flock by making a high-pitched call.

23. Are there any cool mutations found in mandarin ducks?

Yes! Though they're known for their colorful plumage, some mandarin ducks are born with recessive genes that turn them completely white.

They still have the “sails” on their back, and their neck feathers are still ruffled like gills, but nothing is pigmented. They aren't albino, but it's thought that the whiteness is probably caused by something similar like leucism.

24. What are some of the threats facing mandarin ducks?

They might not be endangered, but there are still a few things that can hamper growth in mandarin duck communities:

25. How do mandarin ducks protect themselves from predators?

On the “fight or flight” scale, mandarin ducks choose the latter. They'll quite literally fly away from danger.

Things get a bit more complicated when it's a mother protecting her young.

Since she can't just book it, she'll usually pretend to be injured to draw the predator away from her babies. This gives the ducklings enough time to waddle or fly away, and their mother will rejoin them when it's safe.

26. Do mandarin ducks have any mating rituals?

Mandarin ducks have a very specific way of attracting a mate.

The male uses his colorful plumage to catch a female's eye, and he'll engage in preening and shivering behavior to signify both his interest and intent. He'll also raise his “sail” feather in a courtship ritual.

This is one of those lesser-known mandarin duck facts that surprises people when they learn it, but yes!

If you live in the right kind of environment, you can buy mandarin ducks and keep them on your property. They're more free-range animals than house pets, but as long as you provide fresh water and nesting boxes, they'll be content.

We hope you have enjoyed learning some great mandarin duck facts! Which was your favorite? Are we missing one? Have you seen these beauties in person? Let us know in the comments!

17 of the Weirdest Birds in the World (Photos, Facts, Videos...)
← Previous
How to Remove a Tick: 26 Questions Answered (Head Removal, Dogs, Embedded)
Next →
Click here to cancel reply.

where can I purchase a live mating pair of Mandarin Ducks?

Hi. I not sure if it is of interest but I saw a Mandarin duck in Sutton park. Sutton coldfield. West midlands. Absolutely beautiful and during lock down it was a huge pleasure for a long time. Kind regards Alison.

There is one on farington park near leyland lancashire