In this post, you'll learn all about the fascinating hoopoe bird. We cover hoopoe facts, including habits, habitat, how they got their name, inclusion in religious books and more. Plus lots of photos and videos. Hoopoes are found mostly in Africa and Europe, though some have been spotted as far as Britain. They are very colorful birds and known for the spiky crown of feathers at the top of their heads.

Which makes them look a little bit like the punk kings and queens of birds.

So far, a total of three different species native to Africa, Madagascar, and Europe are recognized. Here are 31 fun hoopoe facts:

3. How much does a hoopoe weigh?

4. What is the hoopoe's wingspan?

5. What is the hoopoes Latin name?

There are 3 hoopoe species. They belong to the Genus: Upupa

6. How did the hoopoe get its name?

Yet another interesting fact about hoopoes is that they’re actually named after the sound of their call. Their name is a combination of the Latin “upupa” and the Greek “epops”.

Its call sounds like two beats of a loud “oop!”. Now that sounds like a punch line to a nonsensical joke—upupa epops oop.

7. Are hoopoes friendly? Or aggressive?

The only time that Hoopoes are generally harmful is if you try to mess with their nests. They will not hesitate to use their beaks to blind.

Though usually to other birds, they first ruffle their crown of feathers to make themselves look bigger. When male hoopoes are confronted with a threat, they tend to raise their crests even larger.

Hoopoes are wild birds and generally don’t interact with humans. However, anyone who lives in one of their regions can help them by planting nests for them in just the right places.

Hoopoes tend to be very independent and solitary birds. Though it doesn’t mean that they’re lonely. They usually interact with each other only for breeding purposes.

8. How long do hoopoes live?

Their average lifespan is about 10 years.

9. What eats a hoopoe? Predators and threats

The hoopoe is not exactly at the top of the food chain. Some of its predators include snakes and birds of prey. Though the former usually goes after eggs in abandoned nests.

Foxes are included as well, though they usually go after motherless chicks. In Israel, parakeets have also been known to invade their nests.

The chicks often appear defenseless against a fox, but they’re not. They have a very stinky secret. They turn around and shoot liquid feces right in the fox’s face. This is the reason why “stinkbird” is one of its nicknames.

The decrease appears to be due mostly to a decline in their habitat. It has only been about 30 percent in their last three generations.

The Hoopoes’ presence seems to be the most populous in Hungary. Particularly in the Great Plains area. In fact, hoopoes were recognized as the “Bird of the Year” there in 2015. Their population was estimated to be up to 17,500 by 2014.

Sometimes they dig for insects. In doing so, they give themselves a dust bath in the process. Hoopoes mate with one partner during each mating season. However, they don’t necessarily stick together for their whole lifetimes. Both are very territorial of their nests.

There seems to be some confusion on this point, with some references claiming that hoopoes are monogamous unless its mate dies. I am unable to verify if they truly mate for life or just for one season.

After mating, the female settles into a nesting area. She usually lays her first egg within six days.

14. How many eggs does the hoopoe lay?

Females lay between seven and 12 eggs per season. The eggs’ incubation period is between 15 and 18 days. The females stay with the eggs during the entire incubation so the male is responsible for feeding her at that time.

He usually only stops at the nest to feed her and then takes right off again to find the next meal.

During this time, the female secretes a smell similar to rotten meat, which helps keep most predators well away from the nest. Unfortunately, though, it tends to attract insects. Even so, they may make a buffet for the female.

What do hoopoe eggs look like? They are quite small, weighing just 4.5 grams (0.16 oz) each. They are round and a light milky-blue when laid.

Hoopoe eggs change color! They are bluish-grey when they’re laid.

However, they turn into a more greenish-brown due to the female’s preen gland secretion and a dirty nest.

Baby hoopoes are covered in a white fluff of feathers just 12 hours after they hatch. It takes only four weeks before they’re ready to fly the nest.

It is the bigger and stronger of the fledglings who tend to make it. The runts tend not to survive if the male can’t provide enough food. If the male doesn’t show up, the female goes ahead and looks for food.

In the latter case, if the female doesn’t come back during a rainstorm, the chicks are significantly endangered. For example, if the storm happens to break the nest down, the chances of the chicks surviving are extremely low.

Even if they do survive, not all of them are lucky to have a human to rehabilitate them. Those who do are often not as motivated to fly at the same time that the rest do. Some become permanently dependent on humans, too.

Of those whose full fledglings do survive, it is usually the oldest who takes the first flight out of the nest. The others soon follow never to return to their nuclear family. They are now on the road of their own independence.

Hoopoes are said to be named after their call. Their name is pronounced both ‘hu-pu' and ‘hu-po,' which is exactly how they sound.

Hoopoes don’t sound particularly loud and obnoxious to humans. It’s their unusual beat and sound that makes them stand out.

The females are known to wheeze during courtships. Babies are known for their loud “tiii” sound when begging for food.

19. How did the hoopoe become the national bird of Israel?

The hoopoe was elected the national bird under President Shimon Peres. The election was held by the Israeli Society for the Protection of Nature with 155,000 participants.

The election was held in May 2008. It took about five months. It started out with 1,000 bird lovers attending a seminar at Tel Aviv University is asked to give their ideas for the candidates.

The hoopoe used to be very populous in Israel. Now they have significantly declined in the area due to a decrease in their natural habitat.

This is the same hoopoe as today.

One of the reasons that the hoopoe is the bird of Israel is that it is mentioned in the Mosaic law in the Books of Leviticus and Deuteronomy. 21. Are hoopoes mentioned in the Koran?

Yes. The hoopoe is explicitly mentioned in Surah #27 which is a verse of good tidings.

22. Where does the hoopoe live?

23. What is the habitat of the hoopoe?

They prefer very wide open spaces and tend to avoid thick, impenetrable forests. The European and Asian species migrate to more tropical areas in the winter.

Unlike other species, they actually do fairly well in areas that have been touched by man. For example, they do well in dry grasslands with a bunch of wildflowers and insects.

European hoopoes especially tend to thrive well in environments such as wine vineyards. Thanks to the fact that more wine farmers are going back to organic means, there is new hope for hoopoes there.

Instead of pesticides, they’re allowing the hoopoes to feed off the insects that are considered to be pests.

Hoopoes are not known to limit themselves to nesting in trees.

They have also been known to make homes under houses, abandoned nests, boulder piles, and even abandoned termite nests.

When a hoopoe takes flight, it’s a beautiful sight to behold. It starts with long stretches of its wings to gain altitude.

Once it is fully airborne, it puts out shorter beats of gliding. This makes it look like a gigantic butterfly, which is why one of its nicknames is butterfly bird. Its top speed is 40 kilometers an hour.

It flies fairly low to the ground. This allows for it to clear most obstacles without having to calculate the distance and slow down.

It’s true. Hoopoes have been known to stop, perk up their crests and move their heads to the beat.

However, they take a grave risk when they do it as music also attracts some birds of prey.

Hoopoes have an interesting pose for when they’re sunbathing. The tilt their heads back while spreading their wings and tails.

They usually follow with a mud or dust bath.

28. Are there any hoopoes in zoos?

There don’t appear to be very many. The San Diego Zoo had some success with breeding them at some point but don’t do so anymore. Denver zoos have been known to occasionally have one on exhibit.

You might be able to find out more by visiting listed zoos on zootierliste.de/en.

29. Are hoopoes found in parks?

Hoopoes can probably be found in parks more than zoos.

The one that’s known to host the most of them is the Dubai Park in the United Arab Emirates.

30. What is the future of Hoopoes?

In general, the results look to be very mixed.

While they’re becoming rarer in places like Israel, they’re still flourishing in many African and Eurasian regions. 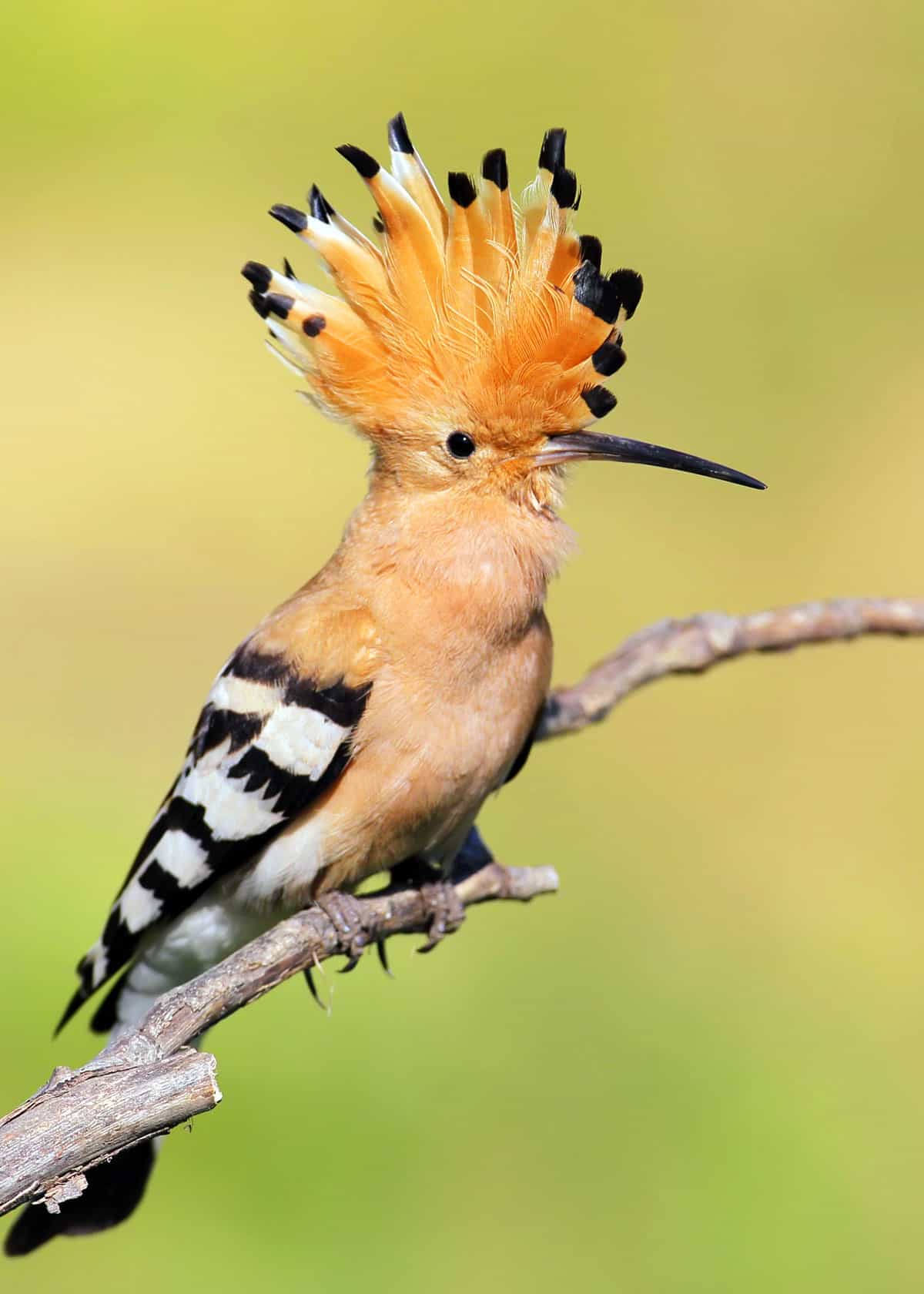 Have a question about hoopoes? Have you seen a hoopoe in the wild? What was your favorite fact? Did we miss one? Let us know in the comments!.

How to Choose the Best Camera for Wildlife Photography (Birding Guide)

30 Potoo Facts: The Bird Behind the Meme (7 Potoo Species) Tons of Photos!

Hi! I’m Drew. I’m 18, and I have a passion for birds. On this blog, you’ll find great info about tons of funny and crazy birds.