Wondering if geese really have teeth? Or if it's all just a clever internet scam? You're in the right place! We've got the low down on all things goose teeth related. 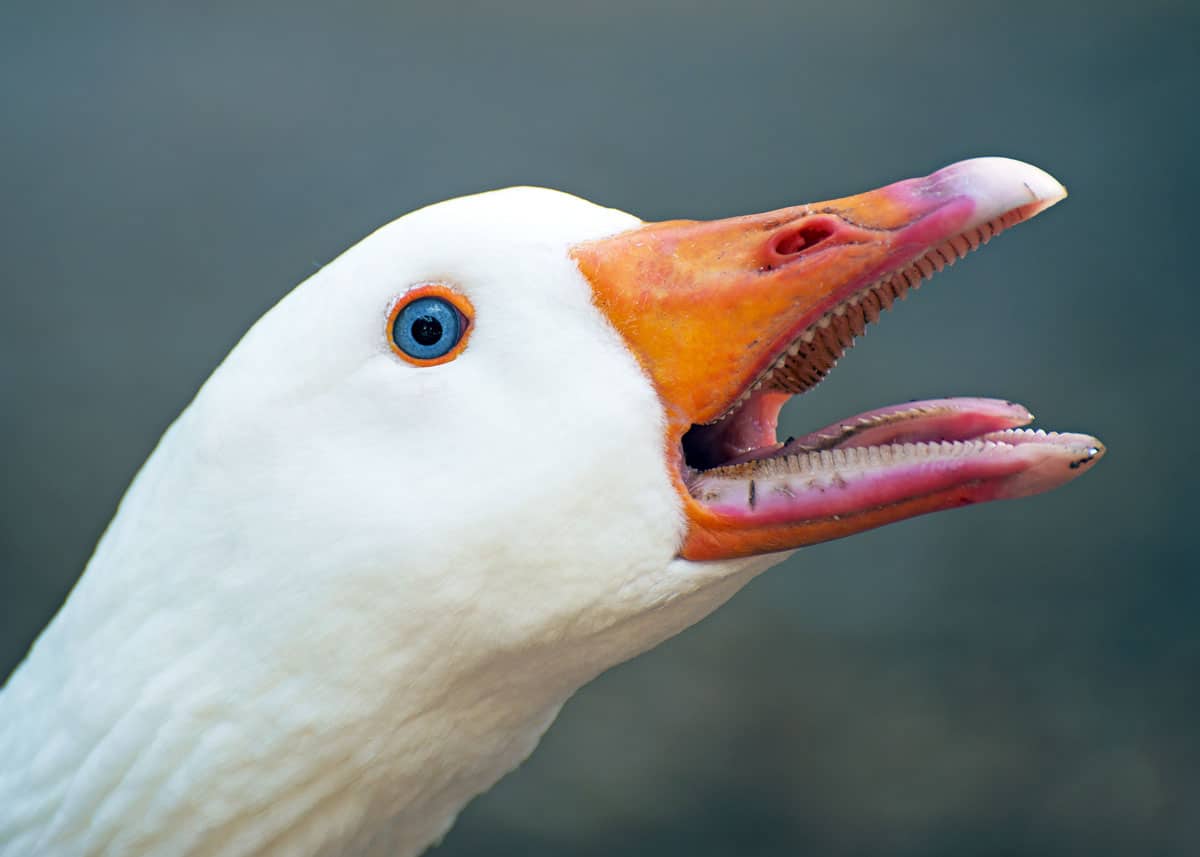 Geese Can't Really Have Teeth… Can They?

There are a lot of myths and misconceptions about goose teeth, so I'd like to clear some of them up for you.

If you're curious about what's really happening under their bills, here's everything that you wanted to know about goose teeth but were afraid to ask!

For all intents and purposes, yes, geese have teeth. But the technicalities are a bit more complicated. It kind of depends on how you define “teeth.”

If you look at pictures, it seems obvious that geese have teeth. There are sharp, pointed white things lining the interiors of their beaks, and the geese use these tools for everything from catching snails to ripping up grasses.

But is that what really makes a tooth? The answer might surprise you.

No. Rather than true teeth, geese are in possession of hard, spiky cartilage known as tomium. It looks and functions the same way as a row of teeth, but it's a growth made from the beak itself. One distinguishing feature of tomium is that it doesn't have any enamel. Enamel is the hard, protective layer that covers real teeth in humans and other mammals.

If you look closely at pictures of goose teeth, you can tell that they lack enamel. They're all cartilage.

Don't be fooled by the word “cartilage.” Tomium isn't soft or pulpy.

It's a bone-hard material that the geese use to rip through both vegetation and living prey, so it shouldn't be underestimated. It can easily draw blood after a bite.

4. Did geese have teeth in the past?

Scientists believe that birds used to have teeth 80 – 100 million years ago.

It could be that birds with larger “teeth” have gone extinct or that the teeth have been bred out of them. Whatever the case, birds today have small teeth-like formations – thankfully.

5. Do geese have teeth on their tongues?

It's okay if you gasp in horror at the sight of a goose's tongue.

Those long, saw-like rows of teeth definitely look like something out of a movie where humans tamper with nature and create killer animals that rampage through the night. 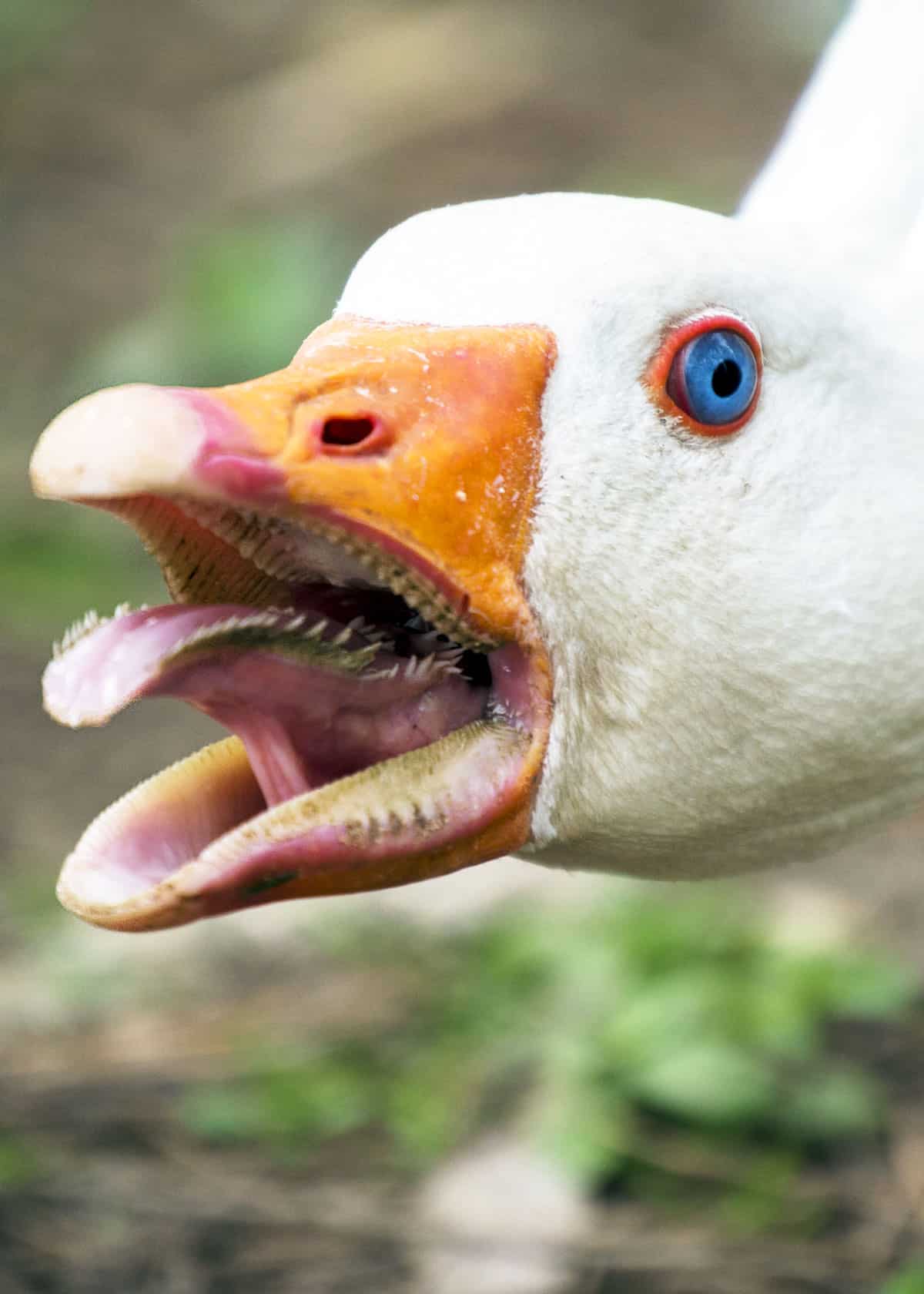 Don't worry too much about geese taking over the world… yet. These “tongue teeth” are another example of tomium. They're usually called serrations or serrated tongues rather than teeth.

6. Why do geese have teeth on their tongues?

There are practical reasons for having teeth on your tongue, especially when you're a goose.

First of all, since geese feed primarily on grasses, grains, roots, and stems, all of their teeth assist in ripping vegetation from the ground.

They'll clamp down their beak on a tuft of grass and shake their head sharply to sever it. Their teeth are used for gripping.

Another benefit of a serrated tongue is being able to hold onto small prey like insects and rodents. These animals are less likely to escape when spikes are digging into them.

Remember: Tomium might not be as tough as real teeth, but it's still able to do some damage.

Yes, geese can get pretty aggressive. If you live near a pond or lake, you've probably seen them acting combative.

They might fly or flutter after people that they perceive as a threat; they might even chase a hapless jogger who ventured too close to their nest. They definitely aren't shy. 8. Why do geese get aggressive/attack?

Geese aren't violent or vicious creatures by nature, but they're extremely territorial. They don't like anyone in their space, and they aren't afraid to defend that space by going after predators and trespassers.

Yes. If geese were ever afraid of humans, their long proximity to our species has dampened that instinct.

That “they're more afraid of you than you are of them” saying doesn't work for geese.

Have you ever seen viral videos of people being attacked by geese? They are pretty funny… until a crazed goose is flying straight for your head.

The biggest headlines are always for unprovoked attacks on campers or swimmers, but there are plenty of others. People have even been swarmed by gaggles of geese after trying to feed them.

Most of these attacks aren't serious, but they demonstrate how little fear that geese have for humans. They'll go after men, women, children and the elderly without discrimination (what? you wanted equality). If they're feeling aggressive, they'll attack.

10. How many people are attacked by geese?

It's hard to pinpoint an exact number for geese attacks because many of them go unreported.

It's also hard to narrow down specific places where geese have gotten aggressive; different neighborhoods in the same community can have wildly different rates of attack.

For example, parks and playgrounds might never be bothered by geese while golf courses might have a persistent problem.

The U.S. Fish and Wildlife Service Division of Migratory Birds did report that 107 people were attacked by geese in 1999. It's an outdated figure, but it should give you an idea of how common that these human-bird skirmishes can be.

Yes. There are some differences between Canadian geese and other species of geese, but when it comes to their behavior when they're feeling threatened, all of them will put their dukes up. 12. Has a goose attack ever killed anyone?

Good news! There have been no documented cases of fatal goose attacks. They might hurt you, but they won't kill you.

13. How do you know if a goose is about to attack?

There are several signs of an impending goose attack: This goose is very likely to attack

14. How can you avoid a goose attack?

Goose attacks can be kind of terrifying. If a goose gets aggressive, here are 6 tips for avoiding an attack:

If your de-escalation tactics didn't work, you might need to defend yourself against an angry goose. Here are some tips:

Is your backyard being overrun with geese? There are a few tactics that you can try to make them go away. The most effective method is to scare them with moving visual ornaments.

Geese use their eyes for hunting more than anything else, so if you have lots of flags, streamers and eyespot balloons on your property, the geese won't even want to land. They'll consider it too dangerous.

Another technique is to use sudden, surprising noises. Propane cannons and whistle bombs can startle the geese into flight, and if these shocks are repeated every time that they land on your property, they'll get the message eventually.

The only downside is that noise-making devices might be restricted in your neighborhood by your homeowner's association, so double-check the rules before you buy anything.

Yes. Goose bites aren't as dangerous as other animal bites, but they can still break the skin and cause bruising, bleeding and swelling.

They can also get infected, so if you see any signs of that, don't hesitate to reach out to a medical professional.

Generally speaking, attack bites are worse than other bites. An accidental nip during a hand-feeding is much different than an angry dad trying to defend his eggs. Wouldn't want to let him bite you!

19. What other ways will a goose attack you?

In addition to biting, geese will aggressively flap their wings at their opponents.

This can pack a hefty amount of force; people have reported things like broken noses after being struck in the face by goose wings. It's like being hit by a 10 – 15 pound punching bag with a reach of 4 – 6 feet. That's their average weight and wingspan.

Yes. It isn't common, but it happens. Geese are territorial birds that are prone to biting, grabbing or “holding” chickens that get into their space. My, What Pretty Teeth You Have

Have you learned a thing or two about goose teeth? They might not be the prettiest things in the world, but they serve an evolutionary purpose, and they're not quite as horrifying as they appear at first glance.

You can sleep easily tonight knowing that those razor-like lines of teeth won't bother you as long as you're careful!

[…] making it the proverbial lame duck, but it wouldn’t be defenseless. Geese have teeth, or at least something like them, and they bite hard enough to cause major bruising. Imagine that sized up ten or twelve times and […]

Why did my goose look like she grew a extra mouth????

[…] Geese have a pretty well-earned reputation as horrible monsters. An independent video game studio even released a game where you play as a goose whose only motivation is being a jerk to an entire town. In the context of a game, this is funny and cute, but geese can be truly terrifying. […]

thanks for the helpfull information!